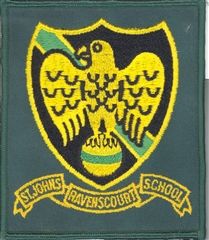 The era following WWII challenged St. John’s College School and Ravenscourt School to re-assess their individual situations, rendered tenuous by economic distress and competitions for the emergence of excellent public schools.
Ravenscourt School saw the possibilities of amalgamation with St. John’s College School. However the College Board voted and refused to support such a proposal. The decision was made to close St. John’s College School by the end of June 1950. The building, located on Main Street, was demolished in 1951.
This decision was contested by both the St. John’s College School Old Boys’ Association and the Ladies Guild. They recognized that the School could not continue with its record monthly deficits and lack of financial resources. Their determination to save SJCS resulted in the Council reconsidering its previous decision, and reopening negotiations with Ravenscourt. The College developed a list of requirements (i.e. there must be a chapel in the new school for their students), which were agreed to along with a consensus on the school name. Location of the School was to be at the Ft. Garry location (former Ravenscourt School).
Stanley N. Jones, who served as the Ravenscourt Chairman of the Board, continued on for the new school. Also, J. Ogden Turner was appointed as Headmaster and served until 1952.
The two schools were singular in spirit, aim and tradition. They even chose the official school colours to be green and gold.
Back